There’s a feature article in Technology Review this month titled and subtitled thus: The Mystery Behind Anesthesia: Mapping how our neural circuits change under the influence of anesthesia could shed light on one of neuroscience’s most perplexing riddles: consciousness.

Someday this kind of article won’t be written any more (fingers crossed!) But today it is, and passes for science writing.  It shouldn’t. It’s writing – nice writing. But it isn’t science. There’s no mystery explained, the subtitle’s claim is almost certainly wrong (in principle), the article itself has no central scientific point, there’s no causal argument for its insinuations and implications. It reads smoothly, and the anecdotes are fun, but on inspection, there’s no there there. There seems to be a there there for the scientists involved, but it didn’t make it into the article, and as a result there’s no there there for the pop neuroscience reader. The concern is that the reader may not know this, and end up mistaking indoctrination for science.

Let’s take a look. A few paragraphs in we get this:

The problem here is that the author is getting the reader to conflate the brain and consciousness through mere constant conjunction, while assuming what she needs to prove.  Since Hume isn’t here to speak up for himself, I’ll do it for him. Let’s label the sentences or phrases with one of two letters: [C] for consciousness, [B] for brain – I’ll insert these letters at the end of each sentence or phrase according to what’s discussed.

Scientists don’t know how being anesthetized differs from other ways of losing consciousness, such as slipping into a coma following an injury [C]. Are parts of the brain truly shutting off, or do they simply stop communicating with each other [B]? How is being anesthetized [B]different from a state of hypnosis or deep meditation [C]? And what happens in the brain [B] in the transition between consciousness and unconsciousness [C]?

As you can see, she is just alternating talking about the brain and consciousness in rapid succession – CBBCBC – so that in the same way that all the static frames of a movie create the false impression of movement (which really only exists in your mind – not brain, mind), she has created the false impression of a causal link.  But logically, there’s no link at all.  It’s just constant conjunction.

The article procedes with a mix of vague, hyperbolic metaphors (about anesthetized brains chanting – like consciousness-manipulating monks, I suppose, which is why so many people come out of plastic surgery Enlightened?) and serviceable, though conceptually fragmented, descriptions of how clinical anesthesiology shows that the brain is organized hierarchically.

This is part of the “blinding us with science” that obscures problem in the underlying insinuation. Hierarchy is passed off as a cutting edge idea, though it is not even remotely new in medicine; it is a standard assumption of modern neurology and found in the works of Jackson, Luria, MacLean among many others, and is a hot topic in computational neuroscience and the Bayesian brain (eg, see Friston‘s work, which is leaps and bounds ahead of what we have here).

I was even taught to think of the brain hierarchically as a no-nothing medical student, on my first day on my neurology rotation. It’s common knowledge. Demented elderly patients have “frontal release” signs in which infantile reflexes (root, grasp, moro, and others) that have been “suppressed” by hierarchically superior regions of the brain for a lifetime are “released” to do their thing again.  Indeed, this is where the concept of regression – from Freud, who was a neurologist – comes from in modern psychiatry.

There then ensues some passages where memory is subtly conflated with consciousness, and the fact that patients cannot remember intraoperative events is mistaken for the idea that they are not conscious during these events. Of course from a logical standpoint – and as anyone who has thought about locked-in syndrome already knows – it is perfectly possible that if you cannot move, because your muscles are paralyzed, and cannot lay down new memory, because your hippocampus is offline – that if you are conscious during surgery nobody will know and you won’t remember.

Anyway, people can lay down new memories during surgery (which, logically, they may only experience during their initial recall, rather than live).

Almost twenty years ago, when I lived in San Francisco, my roommate volunteered for a study of conscious memory under anesthesia at UCSF; they placed him under, feigned that he had coded, and then woke him up. He recalled nothing. They then put him under hypnosis and he recalled the code and had a panic attack – in fact, he was referred to a clinical psychologist to manage the acute stress disorder that then ensued. It was a mess, and I lived through it with him, and certainly learned first hand that memory can be lain down under anesthesia. Our assumption that the small percentage of people who are horrifically conscious during surgery are a digital exception to the rule of loss of consciousness of course assumes what it wishes to prove. Because, you know, what if it’s a continuum?

And of course none of this mentions recent work showing that brain damaged people have much more going on than previously thought.  Of course, if they keep going in this conceptual direction, even at the empirical level the brain=consciousness dogma will come to be seen as under attack.  As our explanations of consciousness require less and less healthy, functioning neural tissue to operate, we may eventually find we don’t need any brain at all.

It could happen.  Matter ended up being energy – a hundred years ago – so we’re already kind of ready to find out that the brain isn’t making the mind. I’m sure after getting over the initial shock everyone will go along perfectly well assuming that the brain sculpts pre-existing consciousness, the way the banks of a river sculpt water, and that consciousness was in the brain – as the electric field – but wasn’t identical with its fermions. They’ll be like it’s the spin-one bosons in the field, not the fermions in their half-spin brain? and then say oh and shrug and say whatever and move on, because life will progress with hardly a hiccup. And after that there’ll be some new paradigm shift – that it’s not even the electricity, it’s just all pure information and energy. Something. And something after that. Life still goes on.  We’ll be living in The Matrix – just this metaphysically spot-on half

without this silly real-world half 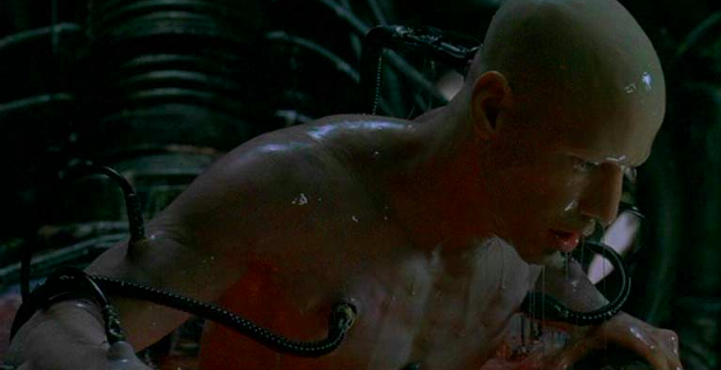 and everything will still be okay.

But until then, like jealous kindergardeners, terrified of letting any part of the universe beside us have consciousness, the modern dogma clings tenaciously to this mind-brain nincompoopery which per se, even in the absence of a better theory, is possessed of no logical necessity.

But I digress. Back to the article; we’re almost done. The author bowls over the protestations of her subject in an inadvertently patronizing manner (in the sense that she does not follow his caveats seriously):

If you can systematically catalogue how the brain loses consciousness under the influence of anesthetic drugs, can you deduce what consciousness consists of? Brown is quick to point out that he doesn’t explicitly study consciousness; it’s a messy problem, and many neuroscientists avoid the very word. His approach is to study what he calls altered states of arousal.

If he’s quick to point it out, why is the author not quick to reconceive her article? Maybe he means it, which means the subtitle of the article isn’t actually valid, even from an interviewing standpoint. We’d have to know whose word “explicitly” is, but it’s plausible that Brown believes he only studies the contents of consciousness, not consciousness itself.

Finally, she ends with a frenzy of constant conjunction that might easily lead the casual reader to believe that modern science, or maybe just anesthesia, is about to solve the mind-brain problem.

Brown hopes the insights gleaned from this work can spill into other areas. Knowing more about how the brain functions under anesthesia could help researchers detect brain activity in people in vegetative states [B], revealing that they may perceive [C] more than previously thought. The safer anesthetics that might emerge from the research could be useful in sleep medicine, and ways of reviving cognitive function in anesthetized patients might give rise to strategies for helping bring people out of comas. Ketamine, a commonly used anesthetic [B], has shown some promise as a treatment for depression [C]; other anesthetic drugs [B] could also prove to have effects that lend themselves to treating psychiatric illness [C]. Studying the loss of consciousness [C] in anesthesia [B] will not just illuminate the nature of the conscious mind [C] but bring these states of dampened or altered consciousness out of the shadows [C].

Which is to say, BCBCBCCBCC.

But BCBCBCCBCC doesn’t mean anything. B might as well = Lady Gaga and C = Jay-Z. They aren’t merely by the power of constant conjunction turned into a married couple.

Meanwhile, back on planet earth, constant conjunction takes us not a whit closer to solving the hard problem.  But if that’s true, then how can the article’s subtitle be true?  Anesthesia can certainly shed light on the contents of consciousness – which are not a mystery in modern neuroscience so much as a problem.  Once consciousness per se is assumed to be made by the brain it is a matter of brute empiricism to figure out what parts do what.  That is, once you table the hard problem, the easy problem is relatively straightforward. But can anesthesia shed light on consciousness per se?  So far our best philosophy says no. All indications point towards consciousness being a basic or fundamental feature of the universe, like quarks are in the world of matter. The Nobel Laureate Frank Wilczek has written nicely (in my favorite recent book on physics) about the impossibility of understanding quarks per se, because they are foundational and therefore cannot be taken apart for analysis.  This is true of all ground truths and basic principles – they are all, essentially, metaphysical constructs.  And therefore if consciousness is not a product of the brain – as this article assumes – but is instead a fundamental feature of the universe (say, by virtue of being identical with the electromagnetic field), then nothing in neuroscience is ever going to shed light on it per se.

What concerns me is that the gestalt of articles like this keeps people away, for at least one day longer, from these more difficult ideas. Pop neuroscience, though well-meaning, is blinding us with science and then in all the excitement insinuating the easy problem is going to solve the hard problem. It ain’t.

This is all quite exasperating.  The dogma of brain producing mind is being shoved – by an entire medical-pharmaceutical-political-religious complex, with vested interests up the wazoo – down everyone’s throats through an intellectual sleight of hand.  It’s magic now, but, they promise, soon it will be science. Any day now. Aaaaaaaaaaaaaaaaany day. Brown seems to get this; the article’s author seems not to.

Maybe it’s because doctors face the awesome limits to their understanding every day in a way non-clinicians don’t, but I’m fairly sure that there’s a word Brown says here with rueful, cryptic, self-effacing, understated – dare I say British? – humor that, somehow, the author missed.

“We know we can get you in and out of this safely,” Brown says, “but we still can’t quite tell you how it works.”

I am a psychiatrist & psychotherapist specializing in the treatment of self disorders. View all posts by Peter Freed, M.D.